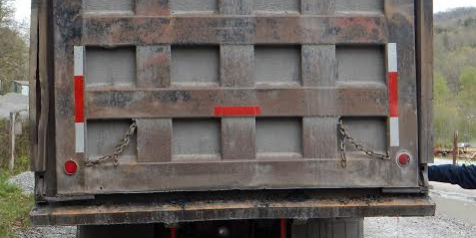 SRI was recently hired on a case involving a A MACK coal truck with faulty safety equipment and the death of Mr. Delbert Boggs. Mr. Boggs drove into the rear of the truck because he could not see the truck at night.  After SRI’s inspection of the vehicle it was determined that the truck had dozens of safety violations including the rear lights and rear under ride device.  The truck’s two rear tail lights were mounted inside the frame approximately five feet underneath the truck bed and less than 2 feet apart. During our investigation it was also revealed that two lights had a short in them which caused them to turn on and off during movement.  Subsequent to SRI’s inspection the defense experts disassembled these rear tail lights and found the short in the lights which caused this malfunction. The required lighting location on the rear of the truck did not comply with Federal Motor Carrier safety regulation 393.11 https://www.fmcsa.dot.gov/regulations/title49/section/393.11 which requires lights on each corner of the rear most portion of the truck (in this case the bed of this truck did not have those required lights).

During the deposition the truck owner was asked about inspections of the truck. He testified that his trucks were inspected by Kentucky Vehicle Enforcement and he was not required to do any further inspections. The truck owner did not know what the federal motor carrier safety regulations were.

Despite the light malfunctions and improper locations as well as dozens of other safety violations, Kentucky State Police and Kentucky Vehicle Enforcement Officers failed to issue any safety violation citations to the driver, the trucking company or the mine operators. The defense in the case tried to use the fact that the KVE did not issue any citations to there advantage.  However, SRI was able to clearly identify that these violations existed and they were a clear causing factor in the traffic collision.

The attorneys in this case retained Dr. David Krauss, a human factor expert and author, to handle the human factors associated with this case. Dr. Krauss discussed the issues of vehicle lighting and declared it impossible for Mr. Boggs to have seen the slow-moving truck at the time of the collision.

After an extensive legal battle, this case was settled to the satisfaction of the client. Both the coal mines and the trucking company were held accountable for Mr. Boggs death. SRI would like to think attorneys Russell Alred, Jason Nemes, and Victor Maddox for choosing and trusting SRI to assist them in their case.

Between the +60 years of combined law enforcement, investigative experience, and the co-owner being an attorney, SRI has invaluable knowledge of what people need to prove their case.  We are here to help.